Onecall Plumbing & Heating only install the most efficient solar panels that operate on natural daylight and do not need direct sunlight. They have been designed specifically for the UK climate. Evacuated tubes convert up to 97% of solar  light into energy and are the most advanced in both design and efficiency.

The systems we install have one of the largest diameter tubes available to maximize the amount of light captured per m2 and the amount of heat retained within the vacuum to ensure the best levels of performance all year round. The reflector is contained within the tube which can be rotated 180 degrees to maximize the performance on any non south facing roof compared to panels where the reflector is behind the tubes.

Adding solar panels to your home can reduce your co2 emissions by 400kg per year. This is the same as a family sized car produces in a year!

Solar panels increase the value of your home with the latest independent studies reporting that two thirds of buyers are prepared to pay up to £10,000 more for an energy efficient home.

As Onecall are government accredited, the Thermal Hot Water system will be eligible for the Renewable Heat Incentive (RHI) Government subsidy due to be launched April 2011.

The Thermal Solar Water Heater System prolongs the life of your boiler as it is used far less and sometimes doesn’t even need to used at all increasing service intervals and reducing wear and tear. 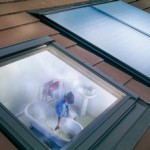